During these years tension in Schleswig-Holstein mounted steadily. The king and the Danes really wanted to absorb Schleswig into the kingdom of Denmark and separate it from the Duchy of Holstein. However, the population of Holstein abhorred the idea of splitting the two duchies and preferred to continue independent of Denmark. In addition, the Danish monarchy could be passed on via the female line, whereas this practice was not open to discussion in Holstein. When Christian VIII made a concession on this point, thereby in effect making the division of the duchies possible, the unrest among the people began to mount even further, especially along nationalistic lines of pan-Germanic and pan-Scandinavian sentiments. In 1848 the Danes, under their new king Frederick VII (1808-1863), got their way by force of arms, which was cause for Prussia to send a force of 12,000 men, reinforced by other German troops, to the north to confront 30,000 Danes and Swedes. When the Danes felt necessitated to withdraw, the Prussians occupied Jutland. Mediation came about under pressure from England and Russia, after which the Prussians withdrew. However, Denmark was not inclined to accept a solution proposed by the great powers – a division of Schleswig along the language frontier – so that belligerence broke out once more in 1849. Even though Denmark had won the battle for Fredericia on 6 July 1849, the ensuing truce did not bring a solution. All proposals that presupposed a division of Schleswig Holstein were enough for its inhabitants to continue the struggle on their own. When Denmark and Prussia concluded a peace in 1850, a split became more feasible.

Without the support of the Prussians, the inhabitants of Schleswig-Holstein were powerless and had to submit to the wishes of the Danes. The latter believed that they had achieved victory but they did not perceive that Russia and Prussia, out of fear of nationalistic sentiment within their own frontiers, had only temporary abandoned their determination to push the conflict to the limits. The complex situation surrounding the wishes of Holstein and the world at large, consisting of the German Confederation, Prussia, England, Russia and the Scandinavian countries, meant that every proposed solution at once met with heated resistance. In 1861 the Prussians gave Denmark an ultimatum demanding that they had to come up with a solution acceptable to Prussia within six weeks. Denmark only agreed to direct negotiations with the Prussians under pressure from the major powers. During these negotiations, the Danish Prime Minister Carl Christian Hall (1812-1888) made the cardinal mistake of underestimating the new Prussian Minister-president Otto von Bismarck (1815-1898) [1], who had been in office since 1862. The Danes had to learn the hard way that this great 19th-century statesman already had his plans completely in place. In fact, they walked straight into a trap set by Bismarck. In March 1863 Danish troops, reinforced by some Norwegians and Swedes, pulled into Holstein and separated it from Schleswig and Lauenburg. Despite fierce resistance within Denmark itself, a common constitution was adopted for the kingdom of Denmark and Schleswig Holstein which ran counter to the wishes of the Russians and Prussians. Bismarck, who was temporarily preoccupied by Polish resistance to Russia, then demanded immediate abolishment of the annexation. When Denmark, overconfident by prior successes, refused, Saxon and Hanoverian troops entered Holstein on 24 December 1864. Denmark turned out to have grossly overestimated its own military strength and was forced to withdraw to Schleswig. This was the chance Bismarck, who needed a war to crush his own opponents in Berlin, had been waiting for to launch an invasion. Although the Danes were not remotely a match for the Prussians, they still did not accept the inevitable and sabotaged a proposed peace conference in London. In June 1864 Bismarck entered Denmark and imposed an utterly humiliating peace on the Danish government, which was deprived of all foreign support, whereby the three duchies, meaning a third of Danish territory, along with fully two million of her inhabitants, was lost. 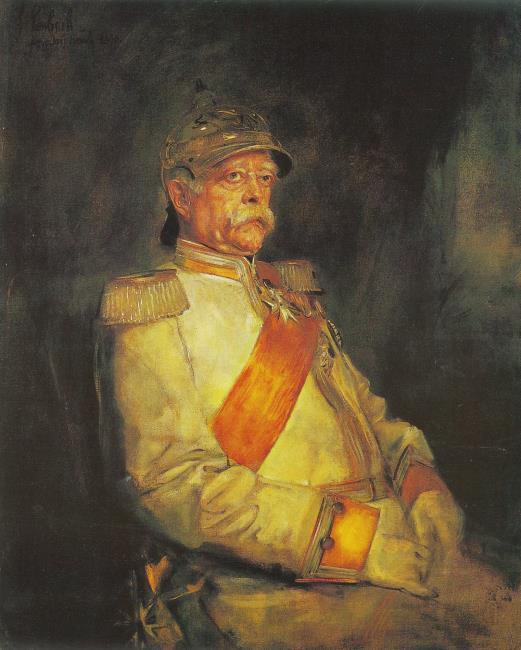