2.2 The Decoration of Rosenborg Castle

When one enters Rosenborg Castle (1606-1633)1 in Copenhagen today, one is struck by a large number of Flemish landscapes that were included as decoration for the walls of the Winter Room (Vinterstue) [1]. They are quality pictures in the style of Joos de Momper II, Jan Brueghel I [2], Frans Francken and related artists.1 They were apparently rendered on commission and to measure in Antwerp at the beginning of the 17th century to serve as decoration for the walls here.2 One of the pictures is said to be dated 1613 [3].3 Especially Joos de Momper (1564-1635) enjoyed great prestige here. The Dutch poet, playwright, diplomat and merchant ‘Sir’ Theodorus Rodenburgh (c. 1574-1644) brought several of De Momper’s paintings to Copenhagen. However, Christian IV did not embrace without reservations the proposal of Rodenburgh to have ‘the renowned painter’ (den vermaerden schilder) enter royal service.4 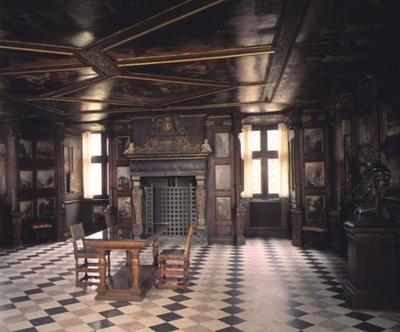 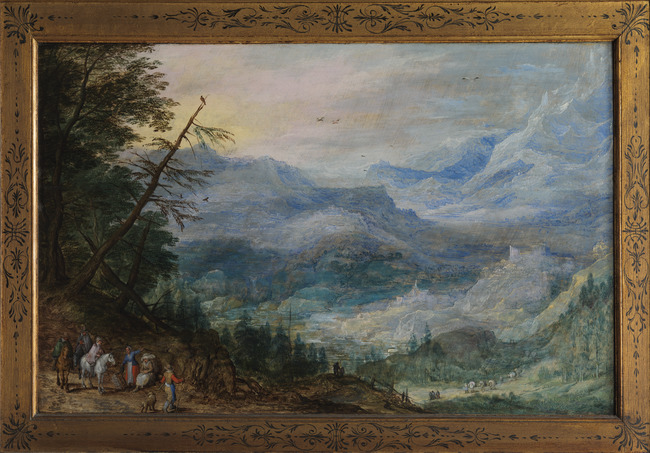 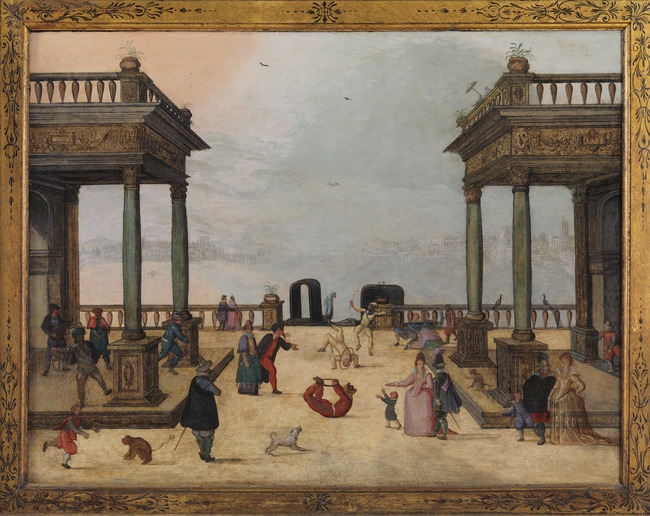 A single landscape in the style of Salomon van Ruysdael is found amidst the Rosenborg paintings. It was apparently introduced at a later date to replace another work [4].5 It can no longer come as a surprise that foreigners at once turned to Flemings for decorative purposes. Flemish art was able to place the full weight of tradition in the balance, whereas the Dutch still needed slowly to conquer foreign markets. In Denmark, however, they quickly met with success.

Remains of similar paneling are found in the Privy Passage (Conseilgangen) of Frederiksborg Castle, although it is not really appropriate to speak of paneling, as they are decorative paintings on canvas. In addition to beautiful large works by De Momper [5-8], we encounter a no less decorative work by Jan Looten (1617/18-c.1681), which is dated 1663 [9]. At one time there must have been more pictures by this artist [10-11].7 We recall that Looten also painted for the castles of Charles I. Did Charles recommend his court painter to his Danish uncle? 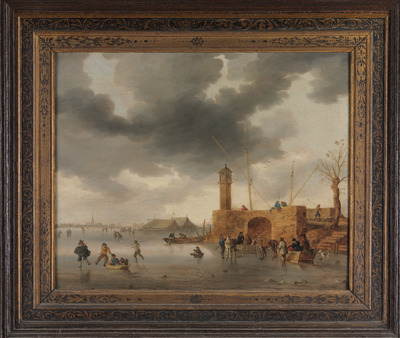 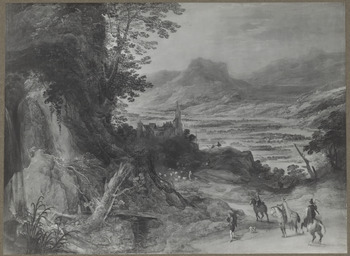 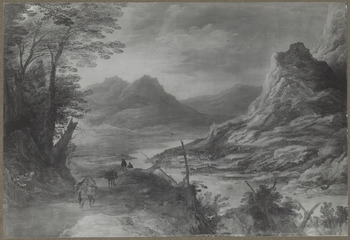 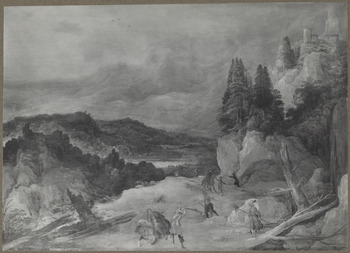 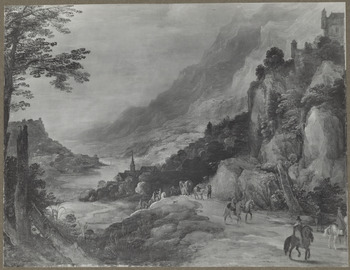 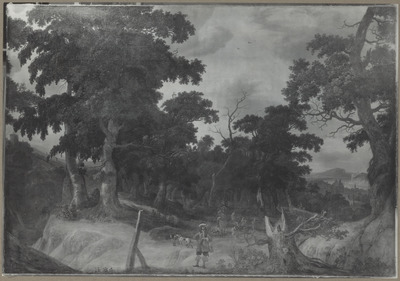 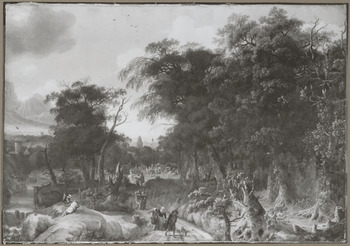 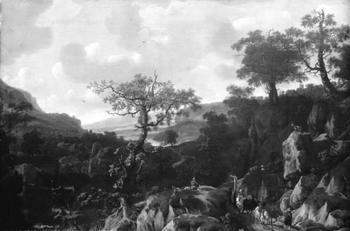 Christian IV did not content himself with such relatively modest wall decorations in Rosenborg. The great assembly hall was to be decorated with a series of massive paintings depicting the joys and activities of human life.6 Various artists worked on this project, and each picture was remunerated with 200 Thaler. The payments continue over several years, starting in 1618. The hall now looks quite different, since the paintings by Frantz Klein (1582-1658),7 Reinhold Thim (†1639) and Pieter Isaacsz (15688 -1625) have been dispersed among various Danish castles (though they are mostly not on display!) [12].9 Only a few are signed, and only a few others may be attributed to one of the three artists with any certainty. They are all more or less indebted to Italian art, even though it is also clear that Northerners assembled these heavy compositions, impeded by their sheer massiveness. The style is voluminously mannerist, with faltering movement. It is difficult to say how much the project owes to Netherlandish mannerist and Romanist forms, or to what degree Pieter Isaacsz was the leading personality of the entire undertaking. Many epitaphs by Thim are vividly reminiscent of the art of Bloemaert [13-14], and other wall decorations by Frantz Klein closely approximate models in the Winter Room.10 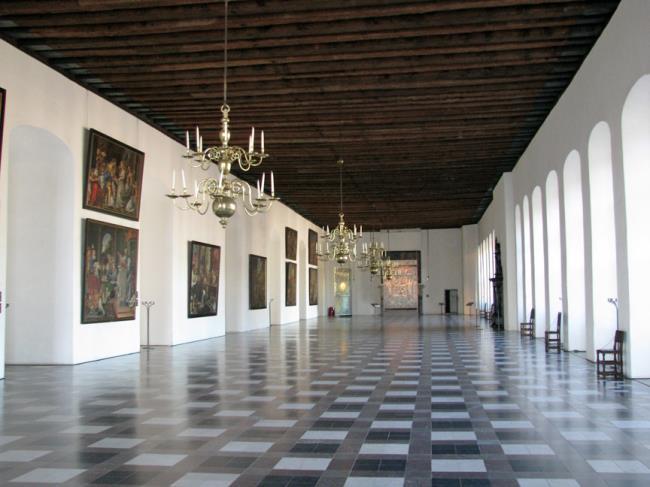 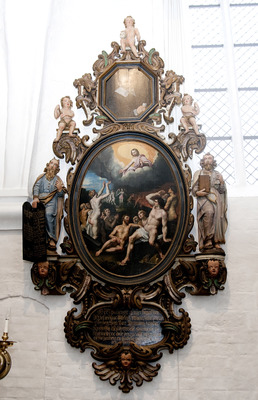 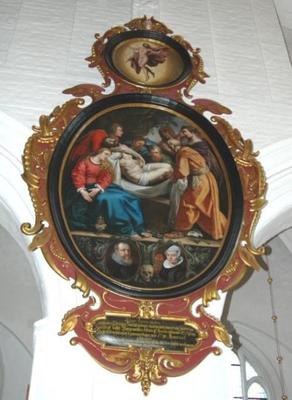 4 [Van Leeuwen 2015] This is indeed the case at the right, below centre, as part of the decorated frieze.

6 [Van Leeuwen 2015] Gerson probably intended the here illustrated ice prospect of c. 1640. The panel, which like many other works in the Winter Room bears the mark of an Antwerp panel maker, has been enlarged by two centimetres at the top. See also § 4.13.

7 [Van Leeuwen 2015] According to Madsen the pendants in the collection of the Statens Museum for Kunst belong to a series of four that hung in the Privy Passage at Frederiksborg (Madsen 1904 , nos. 187 and 188). The Privy Passage at Frederiksborg was restored and redecorated after a fire in 1665. There were paintings in the passage before 1665, but the only one we know is a painting by Pieter Aertsen, which, according to Steffen Heiberg to beidentified with a painting by Aertsen, which today belongs to the University of Uppsala, Sweden (RKDimages 31992). The paintings, which came to the Privy Passage in the 1670s and 1680s were partly Italian and bought in Venice around 1670, partly Dutch, Flemish and German, among others of Van Looten, Joos de Momper; one painting signed by Gabriel Engels in Hamburg (David and Batseba) 1647. It is possible that the Momper pictures were acquired by Christian IV, but we lack positive evidence. Concerning the Privy Passage and the Audience Hall after 1665 see: Heiberg 2009.

8 [Van Leeuwen 2015] On this series see Roding 2007. About 30 paintings were part of the ceiling decorations of the Great Hall of Rosenborg Castle. Another 63 small panels were attached to the walls below. Additional paintings hung on the walls clad in gilded leather. However, these works were replaced by tapestries before 1696. It is not possible completely to reconstruct the programme of the ceiling decorations because many paintings have been lost and because not all of the surviving paintings can be linked to the series with any certainty.

9 [Van Leeuwen 2015] Many of his drawings (Statens Museum for Kunst, Copenhagen) are signed ‘Fr. Klein’, meaning his name might better be spelled with a K. Obviously the Anglified version of his name, ‘Francis Kleyn’, postdates his departure for Mortlake (London), where he worked as a tapestry designer until his death.

11 [Van Leeuwen 2015] The series depicting The Seven Ages of Man, the original decorative scheme of the Great Hall at Rosenborg Castle, is currently on view in the Dance Hall (62 x 12m) of Kronborg Castle. Click on RKDimages 236015 to view the series in RKDimages.

12 [Gerson 1942/1983] Cf. Beckett 1937 and Beckett 1936; (more in Juynboll 1938); Andrup 1937. – Madsen et al. 1901-1907B, as well as the books by Beckett and Andrup introduced immediately above, are of great importance for the remainder of our discussion, though we will not return to the specifics of their text and illustrations. Cf. also Elling 1937; Lund/Andersen 1895-1910 and the catalogues of Danish collections, especially Andrup 1925. [Van Leeuwen 2015] The truly outstanding collection catalogues by Madsen and Andrup were repeatedly reprinted, sometimes with a supplement, but no proper collection catalogues for the important holdings of paintings in Denmark have come out since 1951 (Copenhagen 1951). The lack of catalogues raisonné for the paintings at Frederiksborg and the Statens Museum for Kunst have proved a great impediment to the progress of Gerson research.