After the Kalmar War the Amsterdam painter Pieter Isaacsz (1568-1625) was the most important artist at the Danish court, and remained so until his death.1 Pieter was born in Helsingør as the son of the Amsterdam merchant Isaac Pietersz, who was an important agent for the Danish King Frederick II and the Danish aristocracy. He supplied luxury goods and negotiated art commissions in the Netherlands, including for the tapestry weaving business of François Spiering in Delft. Isaac Pietersz paid the highest tax of all the inhabitants of Helsingør, where he owned a house with a courtyard. Following the death of his wife, he returned with his sons Pieter and Johannes to Amsterdam. Once Christian IV was crowned, Isaac Pietersz again became an agent for the Danish king. In 1596 he also became Commissioner for the States General at the Sound Toll. Around 1583, his son Pieter was apprenticed to Cornelis Ketel (1548-1616). Eighteen months later, he left the Republic to travel to Italy. En route he took up with the German painter Hans von Aachen , with whom he spent time in Venice and Rome. At the end of the 1580s, Pieter became a well-known painter of militia pieces and portraits in Amsterdam. Between 1607 and 1608 he was visited several times by the Danish diplomat and agent Jonas Charisius (1571-1619),2 who was commissioned to acquire paintings in the Netherlands for Christian IV; in Antwerp, Amsterdam and Delft, he bought 145 paintings in the period, worth more than 2,000 rix-dollars. These were works by such artists as Gillis van Coninxloo, Otto van Veen, Aert Pietersz, Cornelis Cornelisz. van Haarlem, Cornelis van der Voort and Pieter Isaacsz himself. At this time Pieter must have had a Danish pupil whom he was training in Amsterdam, financed by the Danish king. It is generally assumed that this was Søren Kiær, but it may also have been Morten van Steenwinckel (1595-1646). By 1610, Kjær himself was already independently making portraits of the Queen and Prince.3

In 1609 we come across Pieter Isaacsz at his father’s home in Helsingør. Johan van Wijck supplied him with patterns for tapestries, that were to be woven in the Republic. In 1614, shortly before the Kalmar War, Pieter Isaacsz settled permanently with his family in Denmark. One of his first works must have been the Half-Length Portrait of Christian IV with Regalia, now at Frederiksborg [1]. In 1615 Isaaczs was appointed ‘Painter in the service of His Majesty’, from which time he made many portraits of the King and members of his family, and supplied the King with artworks by other painters for his growing collection. He also worked for Dowager Queen Sophie at Nykøbing Castle. Unlike the sober portraits by Jacob van Doort, those of Pieter Isaacsz stand out for their strongly contrasting colours. Although particular details of the above-mentioned portrait have been meticulously painted, such as the lace collar and the silk shawl, in other parts a rougher touch is applied. This gives the portraits by Pieter Isaacsz a more dynamic presence than those by Van Doort. 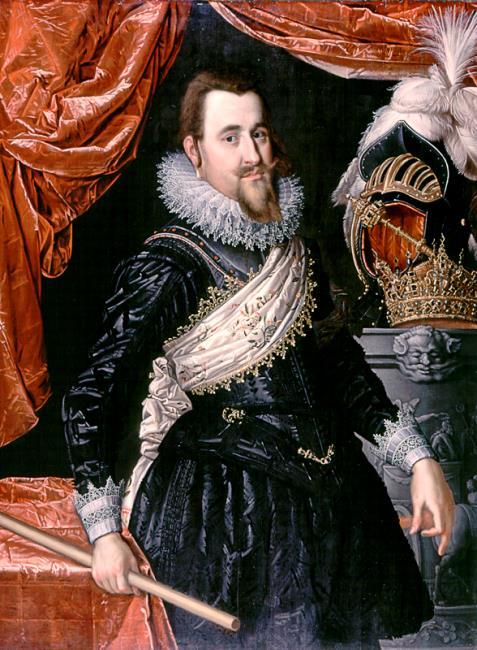 Pieter Isaacsz may have had a hand in the major commission to Karel van Mander II (c. 1579-1623) in 1616 for the series of tapestries for the Great Hall at Frederiksborg, about which his former boss François Spiering had earlier had been in touch with Christian IV. Pieter had previously worked together with Karel van Mander I (1548-1606), on the cover of the harpsichord of the city of Amsterdam [2]. In 1616 Karel van Mander II travelled to Denmark, where in 1616 at Skanderborg Castle he signed a contract for the tapestries that were to depict the victories of Christian IV during the Kalmar War. In the company of several guides, Karel van Mander II visited the places in Southern Sweden where the battles had taken place, to make sketches of the surrounding countryside. The tapestries were finished at the end of 1619. From an inventory of the studio of Karel van Mander II in 1621, we learn that the tapestry designer also carried out further commissions for the King. A series about the life of Alexander the Great was then displayed ‘on approval’ at Frederiksborg. The same applied to several floral tapestries, tablecloths and cushion covers.4 The series of tapestries in the Great Hall was lost in the fire that ravaged the castle in 1859. The present series is a reconstruction dating from the end of the 19th and the start of the 20th century, based on sketches of the original tapestries made by several young Danish artists before the fire [3].5 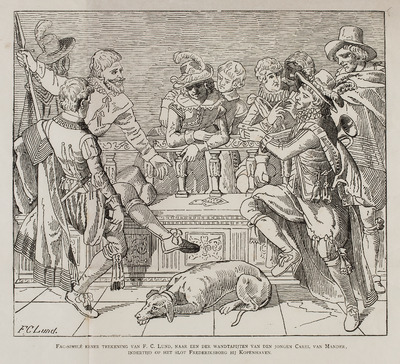 From 1617 Pieter Isaacsz combined his role of artist with that of Commissioner for the States General at the Sound Toll, a position that he managed to acquire two years after the death of his father. From 1618-1622 he was occupied with the coordination of the great series of ceiling decorations for the Great Hall at Rosenborg, and between 1618-1620 he was also responsible for the private oratory of Christian IV in the castle church at Frederiksborg.6Besides Frantz Klein (1582-1658), several other artists worked on the decorative series at Rosenborg, depicting a complex programme of the seven stages of human life. These artists were Reinhold Thim (†1639), Morten van Steenwinckel (1595-1646), Søren Kiær (c.1590/1595-after 1630), Pieter’s only son Isaac Isaacz (1598-1649) and an unknown artist: ‘Lantzon’. What is remarkable about this group of artists is that all of them had enjoyed an international education and had been in Italy, except for Morten Steenwinckel, who went there are the end of the 1620s.7 In this sense, they certainly constituted a new generation at the Danish court.

Isaac Isaacsz, who spent the greater part of his life in Antwerp, also carried out many assignments for Christian IV, after the death of his father Pieter. During a restoration of the chapel at Ledreborg (Lejre) in 1997, a series of 14 paintings came to light, of which five were signed by Isaac Isaacsz. The works, which had been stored in the attic for ages, depict dramatic biblical scenes and large figures and are dated 1624 and 1625. The assumption is that these were made for the Castle at Copenhagen [4].8

For the 23 works on copper with scenes from the New Testament for the private oratory of Christian IV in the church of Frederiksborg, Pieter Isaacsz selected a completely different group of painters, namely specialists from the Republic. These were Pieter Lastman, Adriaen van Nieulandt, Jan Pynas, Werner van der Valckert and a certain ‘PH’. The stained-glass windows for the chapel, also depicting biblical scenes, were ordered from Evert Crijnsz van der Maes. Pieter Isaacsz himself contributed one work, the Annunciation that was the focal point for the whole series. Eleven of the paintings, that is, more or less half of them, were by Van Nieulandt, who had been a pupil of Pieter Isaacsz .9 A striking figure among these Amsterdam history painters, whom Isaacsz would have known well from his time in that city, was Werner van der Valckert, who must have been highly regarded by Christian IV. In 1620, Christian IV commissioned a Mocking of Christ from him. The painting itself has unfortunately been lost, but a print is still in existence.10 The oratory is unique within the history of Dutch art history of the 17th century. Unfortunately, this series was also lost in the fire at Frederiksborg in 1859. 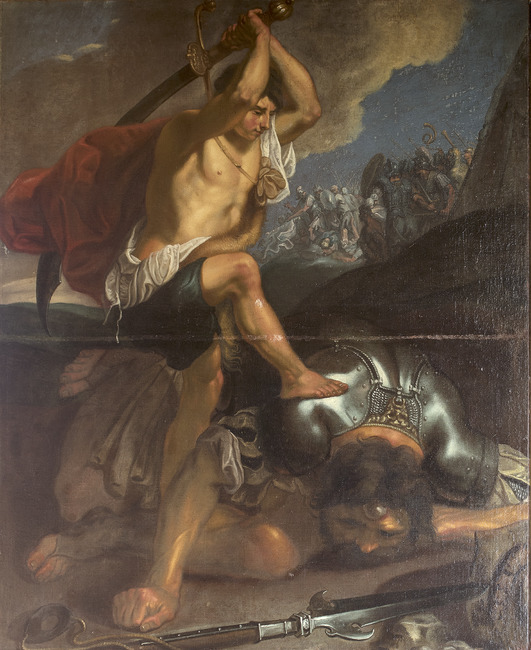 The death of Pieter Isaacsz in 1625 left a temporary vacuum in the Danish art world. Frantz Klein had gone to England to become the director of the Mortlake’s tapestry factory, and Jacob van Doort left in 1627 for Schleswig. The contract with Søren Kiær was terminated in 1627 for reasons that are unclear. Only the elderly Remmert Pietersz was still active, although he no longer received any major commissions. Reinhold Thim had become a drawing teacher in 1623 at the Academy for the Aristocracy in Sorø founded by Christian IV in that same year, where several sons, including bastard sons, of Christian IV were educated. Other sons, including the Prince Elect Christian, had private tutors who taught them sketching and drawing. Prince Christian was the first person in Denmark who at an early stage, in 1642 and 1646, bought etchings by Rembrandt, Rubens and Jordaens.11 This art instruction – in combination with study trips abroad – must have contributed to several sons of Christian IV becoming skilful collectors and commissioners of art works. Ulrik Frederik Gyldenløve (1638-1704), for example, commissioned a portrait of himself in 1662 in Leiden from Frans van Mieris [5].12

In 1624 Simon de Passe (c. 1595-1647) was appointed royal engraver and engraver at the University of Copenhagen. He had previously worked at the English court in London. De Passe arrived in Copenhagen at the start of 1625, but spent time in the Republic from 1627 to 1630.13 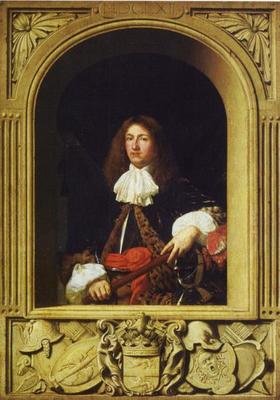