Guild regulations and relationships between the different crafts varied from town to town in the Netherlands – dynamics that make direct comparisons difficult. However, distinctions between joiners, panel makers, carpenters and box makers indicate that each produced panels for different purposes. For example, joiners were not members the Antwerp guild of St. Luke, but panel makers were.1 This shall become an important issue when we discuss the panels used by the Winter Room painters. All the panels are made of European oak (Quercus robur), mostly coming from the Baltic region. This is a dense and straight-grained wood with greater resistance to warping than oak grown in the Southern Netherlands or Germany, found a few times among the Winter Room panels.2 Wainscot boards could provide a durable surface, whether for painting, decorative or structural work. The characteristics of wainscot are precisely those that were valued by painters and joiners, who came to rely on the provision of this material from the 13th century until the end of the Thirty Years War (1618-1648).3

Although there were various sources for oak, it was the vast forested areas in the basin in the Weichsel (now Vistula) River south of Königsberg (now Kaliningrad) and Danzig (now Gdańsk) that saw the greatest harvest and export of timber.4 After trees were felled, they were split radially in order to produce a plank that is less susceptible to warping. The lighter and perishable sapwood (spint) appears to have been left intact to be trimmed by the joiner or cabinetmaker.5 Planks were then loaded onto cogs for the journey via the Danish Sound, a route that from the 1420s until the mid-17th century was under Danish control and where the Danish kings charged Sound Toll, or Sound-Dues, on all ships passing Helsingør.6 From these dues it is known, for instance, that in 1565 approximately 85% of the ships carrying wainscot came from Danzig.7 Jan Diricks van Campen’s engraving after a (now lost) painting by Johan van Wijck, Hafnia Metropolis et Portus Celeberrimus Daniae of 1611, shows a spectacular view of Copenhagen [1]. The prospect not only highlights the Copenhagen harbor and the vast city beyond as the most important in the Baltic region, but also depicts Danish and Dutch ships mooring outside the city. Especially many Dutch ships are seen close to the eastern city areas where the imported timber is being stored before distribution to architects, carpenters and shipbuilders.

In Flanders and Brabant, imported saw-cut wood was prohibited, as were ready-made planks and thus, hand-sawn Flemish panels offer a contrast to the mill-sawn panels from the northern Low Countries. The marks from the hand-sawn panel are slightly curved whereas the machine saw produces parallel marks perfectly perpendicular to the grain. However, tool marks on the backs of panels constructed of more than one board do not always show the same treatment. One plank might, for instance, still show saw-marks while others bear marks from a plane, scraper or, rarely, a small axe.8 A wedge-shaped cleaved board would in some instances be used directly; in other cases it would be planed slightly down, a process that would take place after the gluing of the separate boards. Plane marks crossing the joins are common in the 16th and 17th centuries.

The joiners and panel makers had a range of planes available for trimming the boards: the strijkblok (shooting plane), the gerfschaaf (rocking plane), the roffel (a plane with a convex edge of the iron used for rough work), the blokschaaf (short smoothing plane), a voorloper (smoothing plane), and a bossingschaaf (panel raising plane). When the panel was finished, the edges might have been further trimmed with a dovetail saw or cut with a shoulder knife.9 If the plane had a dented blade, a tiny ridge would appear on the wood which, in some cases, has led to the identification of the same plane being used on different panels that therefore can be attributed to the same panel maker. These irregularities are parallel with the direction of planing and have been caused by large or small notches in the cutting edge of the plane iron. These notches produced raised burrs, and careful measurements in many instances show equal distance between them. This proves that the same plane must have been used in the treatment of the backs of the boards concerned. The inescapable conclusion is that several boards were manufactured in one single work process.10 Had this not been the case, the plane marks would not have been uniform, since a carpenter's plane would have been sharpened after a certain period of use.

We have found a characteristic plane burr on three different frames of paintings in the Winter Room, two of which also bear the monogram ‘GA’ [2]. This indicates that also the third frame with no signature has been treated by the same plane, i.e. produced in the same workshop. As this particular frame is holding one of the top-trimmed paintings in De Momper’s style [3], this indicates that the painting was trimmed and framed in Antwerp before shipment to Copenhagen where it would fit the decorative purpose already established in advance of the order.

The discovery of traces of ‘GA’’s plane and red chalk inscriptions on panels and frames also used for other artists paintings, points to a job done in haste. This precludes the possibility that the paintings have been assembled bit by bit to form the decorations for the Winter Room, but rather that standard size panels were dispersed to a number of artists’ workshops and later returned to be framed by ‘GA’ in prefabricated frames to fit the sizes of the panels.

Smaller panels used for easel painting were often made in standard sizes. Standardization has been recognized in panels made at roughly the same time for paintings for the market in the Low Countries11 which also became the rule for canvasses12 and is still seen in ready-made supports today labelled landscape-size, marine-size or portrait size.13 The use of standard sizes for panels has been questioned by some, and doubts might have emerged from earlier researchers because standard sizes could vary over the centuries, just as the size of a foot or an inch could differ from town to town. For instance, in Haarlem a foot measured 27.6 cm, in Groningen 29.2 cm, the Rhineland foot (e.g. in Leiden) measured 31.4 cm, while an Amsterdam foot corresponded to 28.3 cm.14 However, more recent research suggests that standardization was common and indeed institutionalized in the so-called dozijn panels (the name given to panels made by the dozen). Antwerp joiners’ regulations of 1617 explicitly stated that panels after that date should be made in sizes based on the prototype kept at the guild office.15 Especially two standard size panels are found in the Winter Room, the salvators (saviours) size, measuring approximately 50 by 60 cm, and the trimmed 26 stuivers size (about 80 by 110 cm).16 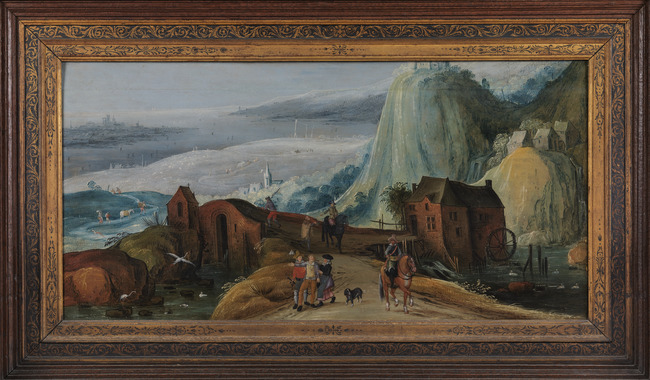 2 A pilot project dating three panels by the Master of the Rosenborg Hunting Scenes revealed that of the two plank panels some were composed of both Baltic and German oak.

6 The Sound Toll Registers are the accounts of the toll which the king of Denmark levied on the shipping through the Sound, the strait between Sweden and Denmark. See http://www.soundtoll.nl/index.php/en/over-het-project/sonttol-registers (consulted April 2014).

13 Studies In Painting Sizes – STIPS – is a research group that systematically explores the introduction and extend of the use of regulated standard formats of primarily panel paintings and their frames in the Netherlands from 1400 to 1800. From this long and highly important chapter in the history of Western art, many tens of thousands of paintings and frames have been preserved. The aim is to inventory and describe this enormous quantity of massively important art works and their frames in order to facilitate their conservation and to increase public awareness of its significance. The project will generate significant background information for conservators and art historians alike to acknowledge and understand the importance of sizes and formats of paintings and their frames. The significance of this reaches even further as it involves not only all panel paintings but also paintings on other supports like canvas and copper plates. Research on these aspects constitutes a crucial contribution to the expertise necessary to understand the painted heritage of the Low Countries, which is a precondition to be able to preserve it. Research team: