5.1 Art at the Danish Court in the Early 17th Century

The field that Van Mander came to dominate developed as a result of the cultural agenda of the young King Christian IV (1577-1648) [1] in the early 17th century. This agenda aimed to supplement economic, diplomatic and military efforts to establish a strong position and reputation as the leader of the Protestant states in Northern Europe as well as the dominant power in the Baltic. Van Mander’s father and his grandfather’s circle of Dutch artists already had been deeply involved in this agenda.

Danish court art was on the rise from 1600 onwards, and gained considerable impetus from the vast war reparations imposed on the Swedes after their defeat in the so-called Kalmar War from 1611-1613. The money that flowed into the privy purse of the king boosted both the import and production of art to a hitherto unseen level in regard to both quantity and quality. Under the leadership of Pieter Isaacsz (1568-1625), in particular, who was a close acquaintance of Karel van Mander I, art was firmly established as an integral part of Danish court life. The palaces of Frederiksborg and Rosenborg were lavishly decorated, with imported works of art and commissioned art from Isaacsz’ circle and network in the Netherlands.1 Among the most prominent commissions was the large series of tapestries, depicting the Kalmar War in the Dance Hall of Frederiksborg Palace, executed between 1616 and 1621 in the workshop of Karel van Mander II (c. 1579-1623). In the last years of Isaacsz’ life, the seeds of a general structure of Danish courtly art production were sown. In 1623, the knightly academy at Sorø, one day’s ride from Copenhagen on the island of Sealand, was established in order to provide a place for the higher education of the sons of the King and of the high nobility.2 To this institution was connected a drawing teacher, who came to serve as a kind of second in line among the artists in the employ of the Danish king. The first of these drawing teachers was Reinhold Thim (†1639), who held this position from 1624 until his death in 1639. Under the leadership of Pieter Isaacsz, he had been working on the large allegorical decorative scheme for the Dance Hall at the king’s new pleasure castle, Rosenborg, and continued to produce history paintings and both permanent and ephemeral decorative schemes for the king until his death. 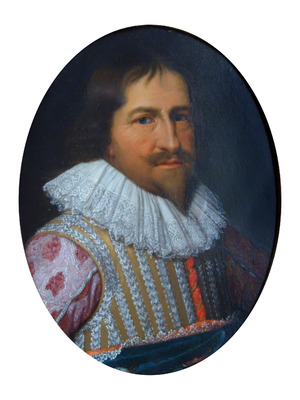 Meanwhile, Christian IV employed a whole range of other artists closer to court, particularly as portraitists, but also for many other purposes. The death of Pieter Isaacsz in 1625, and of the second important court artist, Jacob van Doort (†1629) coincided with the first major military and economic crisis that Denmark encountered due to the continued struggle against the Swedes for dominance that would eventually reduce Denmark’s position very considerably. Artistic production stalled for the better part of a decade before a renewal of reputational effort by the king was inaugurated with the magnificent wedding of the Prince Elect, Christian, in 1634, known as ‘det store bilager’ (the great wedding).3 Here we find the young Karel van Mander III as one of the key figures in the team that arranged the splendid setting that was to signal to Europe that Denmark was having a comeback. Van Mander must have shown his superior skill and versatility in the designs for this grandiose event, and was soon among the preferred artists at court.4 He must have used his contacts as well: his mother, Cornelia Rooswijk (a skilled merchant and widow of the king’s tapestry maker Karel van Mander II) provided the court with spices and luxuries, and her brother, Engel Rooswijk (1583/84-1642/49), Van Mander’s uncle, who in 1623 and in the late 1630s worked for the king as painter and art agent. At this time the career of Van Mander and Abraham Wuchters, reaches the first of the four phases into which it may be divided.