The contents of this gallery are documented in Morell’s Beurtheilendes Verzeichniß aller in der Neuen Gallerie befindlichen kostbahren Mahlereyen […] (Critical Catalogue of all the Precious Paintings Located in the New Gallery) of 1767. By this time the constellation of individuals responsible for the art collection at the Danish court had changed fundamentally. King Frederick V, who favoured the erection of a gallery, had died in 1766 and in his wake Morell’s mentor, Adam Gottlob Moltke (1710-1792) [1], also fell. The new, mentally unstable King Christian VII (1749-1808) appears to have had no real interest in the art collection. Against this background Morell’s Verzeichnis, in which he expressed gratitude for the royal confidence in him and for his reaffirmation as gallery director, was equally intended to alert the king to the treasures of the gallery as well as to the indispensability of its director. Thus Morell expresses the hope that the king may ‘experience pleasant enjoyment by admiring what is beautiful, noble and elevated’. With this kind of aesthetic vocabulary of the Enlightenment, the gallery director incorporates a reference to his own competence and decisiveness when he speaks of a collection ‘that was made with choice and knowledge, and furnished with order, harmony and taste’. It is these attributes that also apply to the qualitative criteria for a collection and collector in contemporary auction catalogues.1 As an entirely practical gesture to the king, Morell offered to introduce a comparable new arrangement to the Kunstkammer, the director of which, Wahl, had already died in 1765, as well as to inspect the holdings of paintings of Frederiksborg Castle.

The ‘critical catalogue’ documents the state of the gallery as Morell had conceived and installed it. At the same time each artist is classified art-historically, with each painting described with respect to its provenance, its meaning in the oeuvre, or it place on the art market. As this was not a commemorative record of the Danish Royal house, only portraits of exceptional artistic quality came to be exhibited. Dutch and Flemish paintings were greatly in the majority, interestingly with histories outnumbering genre paintings and still lifes (see Table 1 and 2).

As the acquisitions for the Kunstkammer with respect to Morell are well documented, one can in great part identify the exhibited pieces. It should be said that many of the paintings in the new gallery had come to Copenhagen in the 1750s; on the one hand they belonged to those that Morell had sold to the Kunstkammer from Hamburg in 1755; on the other they were paintings which Morell – already having a picture gallery in mind – had purchased in the Low Countries in 1759. At issue are mainly Dutch and Flemish cabinet paintings of the kind that also featured in the collection of Minister Moltke.2 Perhaps one can even discern two competing collections as conceived by Morell. That could explain that Morell preferred expensive histories as well as Flemish still lifes and animal paintings to the more affordable landscapes. To the former genre belong, for instance, the Sea Battle by Bakhuizen (800rd.), a hunting still life by each of Dirk Valkenburg and Jan Weenix (400 and 300rd. Respectively [2-3]), a Poultry Yard by Melchior d’Hondercoeter (300rd.), a Fruit and Flower Still Life by Joris van Son (300rd.), a Kitchen Scene by Frans Snijders (200rd.) [4] and a Crowning with Thorns by Hendrick ter Brugghen (300rd., purchased as Honthorst) [5].3 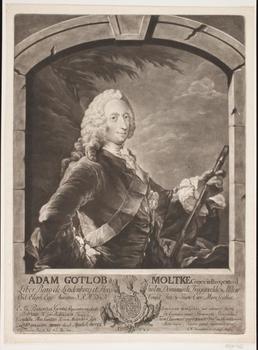 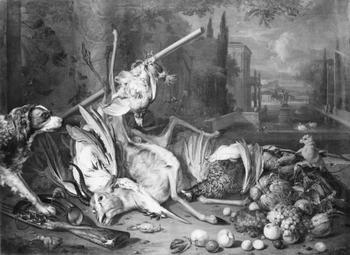 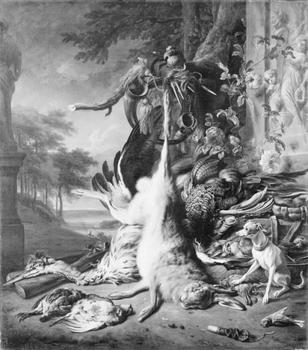 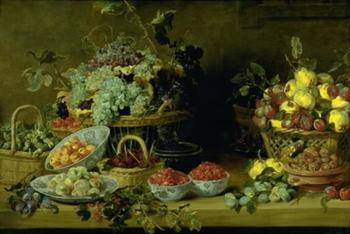 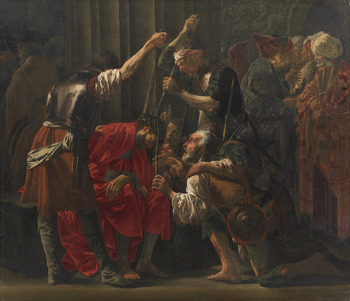 Of the acquisitions of 1759, the portraits by Ferdinand Bol (25rd.), Bartholomeus van der Helst (28rd.) [6], Michiel van Mierevelt (20rd., now Pickenoy), Rembrandt’s Christ and the Disciples on the Road to Emmaus (75rd.), Ferdinand Bol’s Easter Morning (180rd.) [7], Adriaen van Nieulandt’s Entry into Jerusalem (100rd.) [8], Castiglione‘s Rebecca at the Well (65rd.), Roos’ Bull Fight (250rd.), Zacharias Webber‘s Allegory on the Sciences (100rd.) [9], landscapes by Jan Hackaert (65rd.), Wouwermans (64rd.) and Van der Does’ (20rd.) as well as a battle piece by Jan van Huchtenburg (100rd.) [10] all found a place on the walls. Of the artistically important acquisitions of 1763, only an Italian Landscape by Horatius de Hooch (50rd.) [11] and a Northern Landscape by Allaert van Everdingen (60rd.) were considered. The large Italian works of the Valenti collection appeared to challenge the character of the cabinet. 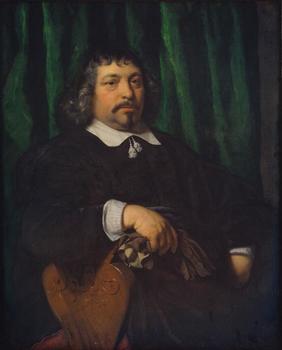 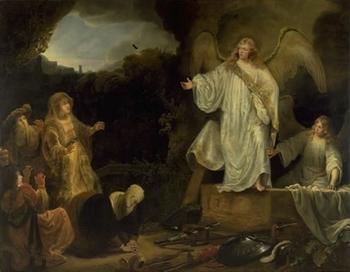 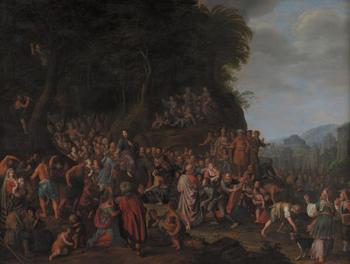 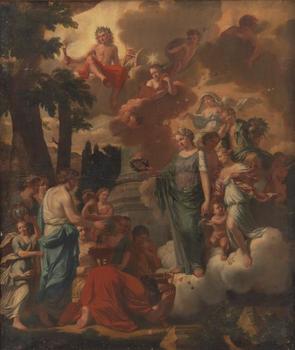 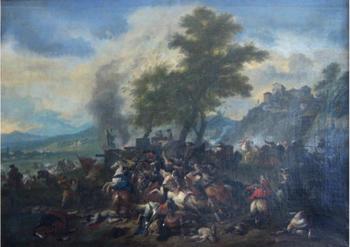 As part of the way pictures were hung, paintings by Roos, Ter Brugghen and Bol came to be juxtaposed with works that were already in the Kunstkammer, such as the pictures by Jacob Jordaens (after Ovid) [12], with an Allegory by Pietro Liberi as well as a Wedding of Alexander and Roxane by Gerard de Lairesse [13] at the middle. The same role was served on the side walls by the Kitchen still lifes by Frans Snijders [14].

Morell leaves us in the dark with regard to what motivated him to select precisely these works for the gallery. Authentication of his claim to a connoisseur’s ability to differentiate between original and copy may have been one criteria; and indeed, most of Morell’s proposed attributions for the new gallery hold to this day. Justification for the high prices at the sales of 1755 may also have played a role. It also appears to have been important for Morell to convey a representative overview of the Dutch and Flemish painters, with their characteristic masterpieces. In the process he largely repeats the body of artists uncovered by Houbraken and passed on by Jean Baptiste Descamps, although he is more inclined to be critical of details. For instance, he notes that because of the ‘negligence of Houbraken’, the teacher and year of death of Johannes Lingelbach are not known. In the case of Mierevelt he relegates the 5,000 paintings that the artist is said to have done by Houbraken, along with Descamps’ 10,000, to the land of fables. On the other hand he agrees with Descamps’ assessment of the worth of Bartholomeus van der Helst.4 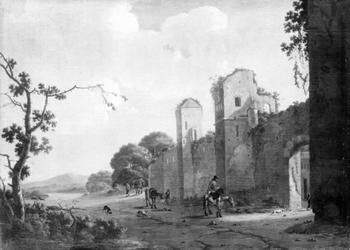 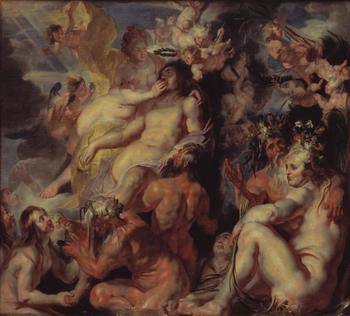 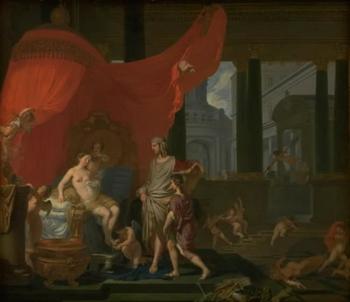 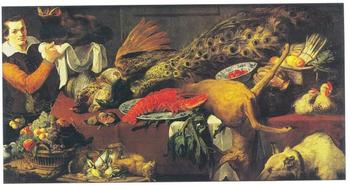 3 The Bakhuizen, Hondecoeter and the two Van Sons are illustrated in § 6.2.