A very important source for the later period of Gelton’s life is located in Denmark’s Royal Accounts. It appears that starting on 23 September 1674 he was to receive an annual salary of 600 rix-dollars. The Accounts1 also provide the following information about him:

Undated. Painter Gelton, the remainder for some paintings, as declared .... 400

Gelton’s annual salary, amounting to 4,000 to 5,000 Danish kroner, was normal for that time. As court portraitist in Sweden, David Klöcker Ehrenstrahl (1628-1698) received 600 silver dollars, for which he was required to produce eight half portraits of Karl XI per year. About ten years after his appointment he was also paid extra for paintings done for the court. Of Gelton’s Danish colleagues, Abraham Wuchters (1608-1682) received 300 dollars from 1639 on as drawing instructor and painter at the Academy of Sorø. Peder Andersen († 1694) received 400 and, from 1685 on, 600 rix-dollars per year. His pupil Magnus Berg (1666-1739) received 400 dollars during the reign of Christian V. Jacob d’Agar (1642-1715) was an exception. As ‘gentleman of the court and first painter of the King’ (gentilhomme de la cour et premier peintre du Roi) he received a munificent annual salary of 1,500 rix-dollars, which was likely because he was a co-religionist of Queen Charlotte Amalie. After the death of Christian V, Gelton’s salary was reduced to 800 rix-dollars.

Five months after Gelton’s name first shows up in the Danish royal accounts, he receives the following passport:2

We, Christian the 5th etc.

Hereby declare that we graciously recommend our virtuous painter, the dear and faithful Tousainet Gelton to go to several electoral courts and other courts in Germany to paint our dearly beloved sisters and other family members and to bring these [the portraits] here.

We request all, higher and lesser governments as well as civil and military subjects according to their status to grant free and unhindered passage and once more grant passage through all towns and villages, by land and by water, to the expressly recommended painter [and] all persons accompanying him and all the goods that he has with him. Whereas we wish to remain on friendly terms and treat all persons with the respect they deserve according to their status, we need to stress that our people are following the King’s strictest orders. Official legal document under our royal signature [...]. 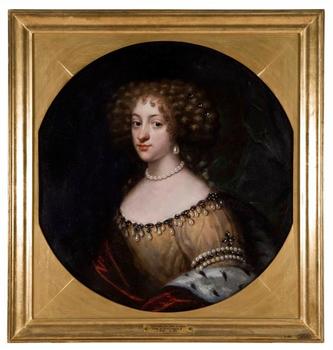 Although Gelton received 500 rix-dollars only a day after the issue of the passport on 22 September 1674, he only left towards the following spring, after 12 February, when he received his salary for a half year, but before 1 June, when a bill of exchange for 400 dollars was drawn up for him.

Things went wrong in Saxony, when princess Anna Sophie, to whom Gelton presented himself in August 1675, lost his letter of transit, so that she had to write to Christian V to request a new one. Her letter on this subject, which has survived in the original,3 reads as follows:4 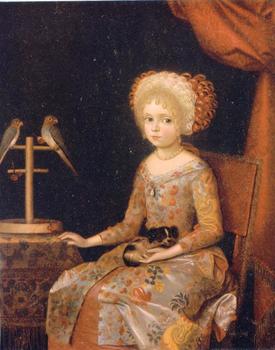 Most Illustrious, most powerful King,

Most honored and otherwise Much beloved Brother and Godfather.

Your Royal majesty, II am obliged to report these lines [for] your court painter Toussaint Geltton, who these days, with handing over of your royal majesty’s pass, humbly presented himself to me and at your most merciful command desired to paint my portrait. I have now in the meantime misplaced said pass, but the painter badly needs it to further continue his journey to Heidelberg and Cassel, where your royal majesty most graciously urged him to go. May it satisfy your royal majesty’s mercy to let him journey on and to send me a new pass for him. Which is what I hereby request of your royal majesty with sisterly friendship, and remain in sisterly loyalty to you, most eager and determined to serve you in all things to my best ability.

Your royal majesty’s most obedient sister and servant

The subscript of the letter, from ‘Your royal majesty’s’ on, is autograph.

The letter establishes that Gelton had only just arrived in Dresden. It appears that he left Denmark much later than might be assumed on the basis of the date of the passport (22 September 1674).5 On the same day on which princes Anna Sophie wrote her letter to Christian V, Gelton travelled from Glückstadt to Wismar in connection with the war with Sweden. Not until 23 December 1675, after Wismar had fallen, did he return to Copenhagen.

A journey undertaken by the king himself,6 in combination with delay in postal service,7 may have prevented Gelton from travelling on to Cassel, where, according to Anna Sophia’s letter, he had to go at the command of the king before the beginning of 1676. The purpose of this journey was almost certainly to portray princess Hedvig Sophia, Christian V’s mother-in-law , who had ruled in Cassel since the death of Landgrave Wilhelm VI in 1663, even though her second son had reached the age of majority (her oldest son, also Wilhelm, having died in 1670). However, we do not know of a portrait of Hedvig Sophia by Gelton. It may be that she was not in Kassel when he was there.

The inventory of the Kunstkammer8 mentions the following paintings by Gelton: 1. Fridericius Tertius. 2. Queen Sophia Amalia, both painted by Gelton. 3. Prince Jørgen, painted by Gelton [3]. 4. The Ark of Noah, in which all sorts of animals which are gathering there, painted in water colors by Gelton in a black frame with glass in front. 5-6. Two landscapes of the same dimensions, with deer in all kinds of positions, equally painted in watercolors by Gelton, in black frames with glass in front. 7. Queen Ulrica Eleonora in the same format (i.e.: ‘as big as a half sheet of paper’), executed by Gelton. 8-9. The Elector of Saxony and his spouse, executed by Gelton. 10. The Elector of Heidelberg and 11. His spouse, executed by Gelton. 12. Duchess Frederica Amalia by Gelton. As pendant of Gelton’s portrait of Prince Jørgen, the inventory mentions ‘His spouse Queen Anna, painted in England by Wilcken (i.e. Ribolt]’. It appears from this list that Gelton painted the two electoral princes in Heidelberg, but not Christian Albrecht, Duke of Holstein-Gottorp, whose wife he may have portrayed in Copenhagen on another occasion. Of the 12 works mentioned in the inventory of the Kunstkammer, only five have survived.

After more than a two and a half years abroad, Gelton at last returned to Copenhagen, where he arranged to receive his salary on 18 November 1677 and was paid 1,200 rix-dollars for the preceding two years. Before his return he spent some time in Amsterdam, where he came into contact with Antoinette Bourignon. 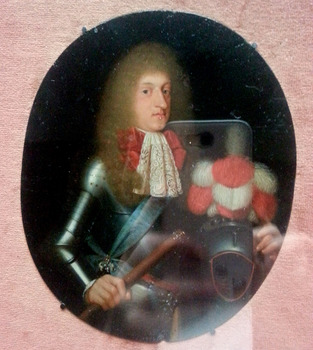 1 Overkammerjunkerens Regnskaber, Rigsarkivet. In Ph. Weilbach’s collections in the Royal Library the greater part of the items has been taken over, albeit with a few inaccuracies.

5 In the aforementioned article by N.H. Weinwich in Athene VI, 540 ff., the author states that Gelton was in Saxony ‘for 11 months, after which he returned there with a pass from the Electoress’. This must be an incorrect interpretation of the contents of the letter from Anna Sophie (26 August 1675), which was written precisely 11 months after the issue of the old pass (22 September 1674).

6 The route taken by Christian V during this journey can be traced in the ‘Overkammerjunkerens Regnskaber’ in the Rigsarkiv and in John Laverentzen, Tages-Register des Herrn Christian den Fünften, Copenhagen 1701, which is not altogether reliable.

7 The Brandenburg Post, which was founded in 1653 to facilitate the traffic in governmental letters, needed 24 hours to complete the journey from Dresden to Berlin, from where, after 1654, there was a bi-weekly postal service to Hamburg. The latter route took 42 hours. There was also a postal service from Hamburg to Copenhagen twice a week, which covered this distance ‘in less than three days time’. See H. Stephan, Geschichte der preussischen Post, Berlin 1859, 19, 34; Fr. Olsen, Det danske Postvæsen, Copenhagen 1889, I, 89, 232.